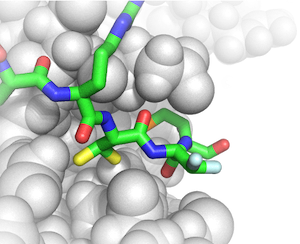 Macromolecules, such as proteins, perform their functions by dynamically changing their interaction partners in the heterogeneous cellular environment. Taking advantage of the strength of NMR, which can analyze interactions at atomic resolution even in heterogeneous systems, we have elucidated the functional roles of specific as well as seemingly unnecessary non-specific interactions of macromolecules. The interaction analysis by NMR is useful for clarifying the functional role of biomolecular interaction and for structure-guided optimization of bioactive compounds.