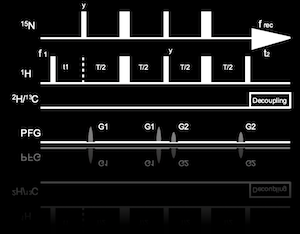 We put efforts on developing methodologies that can elucidate the functional mechanisms of high-molecular-weight proteins, establish structure-function relationship analyses that do not rely on mutants, and introduce intracellular structure-guided drug development. These various fundamental technologies will provide additional value to the structural and dynamical information revealed by NMR and promote its utilization.